Dilhorne is a parish and scattered but pleasant village, 2 miles north from Blythe Bridge station on the Stoke and Uttoxeter section of the North Staffordshire railway, 2 ½ west from Cheadle, in the Leek division of the county, hundred of North Totmonslow, Cheadle union, petty sessional division and county court district, rural deanery of Cheadle, archdeaconry of Stoke-upon-Trent and diocese of Lichfield.

The parish comprises the townships of Dilhorne and Forsbrook, the latter being separated for ecclesiastical purposes. The church of All Saints is a building of stone of the 12th century, consisting of chancel, nave, aisles and an octagonal western tower containing a clock and 5 bells: the nave and aisles were rebuilt in 1819, and the entire building repaired in 1868, at a cost of about £250: in 1885, a new organ was added at a cost of £250 and a sum of £200 was spent in various improvements: there are 250 sittings.

The register dates from the year 1558. The living is a vicarage, average tithe rent-charge £51, net yearly value £257, including 85 acres of glebe, with residence, in the gift of the Dean and Chapter of Lichfield, and held since 1883 by the Rev. John Beckett, of St. Bees. There is a Wesleyan chapel here.

Foxfield colliery, in this parish, was opened in 1884 by Messrs. John and Enoch Mann. The charities are of the yearly value of about £30.

Dilhorne Hall, the seat of Sir Morton Edward Manningham-Buller bart. B.A., D.L., J.P. is a handsome building, delightfully seated in a valley and was rebuilt in 1830. The Hon. Edward Swynfen Parker-Jervis, of Little Aston Hall, Stonnall, who is lord of the manor, Sir M. E. Manningham-Buller bart. and Sir Lionel Milborne Swinnerton-Pilkington bart. D.L. of Chevet Hall, near Wakefield, are the chief landowners.

Dilhorne, or Dilhorn, is a small but pleasant village, two and a half miles WNW of Cheadle and four miles E by N of Longton, comprising within its parish the townships of Dilhorne and Forsbrooke which support their poor conjointly.

The former has 736, and the latter 843 souls, and they contain together about 3550 acres of land. Dilhorne Hall, the handsome seat of Edward Buller, Esq, the lord of the manor, stands in the centre of the village and was rebuit in the ancient style about 20 years ago.

A Topographical History of Staffordshire by William Pitt, 1817

Dilhorne is a parish of Totmanslow North: it is of considerable extent and population. This parish, including Fosbrook township, contains 242 houses, 249 families; 581 males, 603 females: total of inhabitants, 1,184. Some of the lands in this parish were greatly improved by the judicious management of the late John Holiday, Esq. of Dilhorne Hall. In 1792, the gold medal given by the Society for the Encouragement of Arts and Manufactures was adjudged to him, for having planted at Dilhorne 113,000 mixed timber trees. Previously to this, his extensive and romantic winding vales and fertilized hills, were adorned with hedge-row elms, oaks, and other trees. There are also excellent coal-mines in this estate. But the most valuable coal-mines hitherto discovered in this parish, are those on the estate of Samuel Bamford, Esq. who has a handsome mansion near the village of Dilhorne, with extensive pleasure-grounds.

The village of Dilhorne is but small. There is a free grammar-school here, endowed by the Huntingdon family, who formerly held property in this parish, which came to them by marriage with one of the co-heiresses of Sir John Port, the founder of a noble institution for the instruction of youth, at Repton, in Derbyshire. The present master of the grammar-school at Dilhorne, is the Rev. John Smith, MA, who resides in the vicarage-house. Another free-school is established at Blithemarsh, in this parish, for the township of Fosbrook; Mr. James Dunn is the present schoolmaster. A school for girls has also been established, by the beneficence of Lady Buller, Mrs. Holiday, widow of John Holiday, Esq. and Mrs. Willatt, who are all residents at Dilhorne Hall. In this school eighteen girls are maintained, clothed, furnished with books, and instructed gratuitously.

Dilhorne Church is an ancient structure of stone, with a very curious octagonal tower, which contains five musical bells. The interior is neat, the pews are of oak, and the roof is supported by eight Gothic arches. The timber of the roof is oak, adorned with curious carved work, and the outside is covered with lead. There are several monuments in the chancel, but none of the inscriptions are remarkable.

The parish registers are entire for about two centuries and a half, and the most curious circumstance recorded in them is, that, during the Protectorate, the banns of marriage between a man and a woman of Dilhorne were published at the market-cross of Cheadle by the town crier, and the parties were afterwards married by a Justice of Peace.

The church is a vicarage, dedicated to All Saints, in the patronage of the Dean and Chapter of Lichfield Cathedral, and the present vicar is the Rev. Henry White. 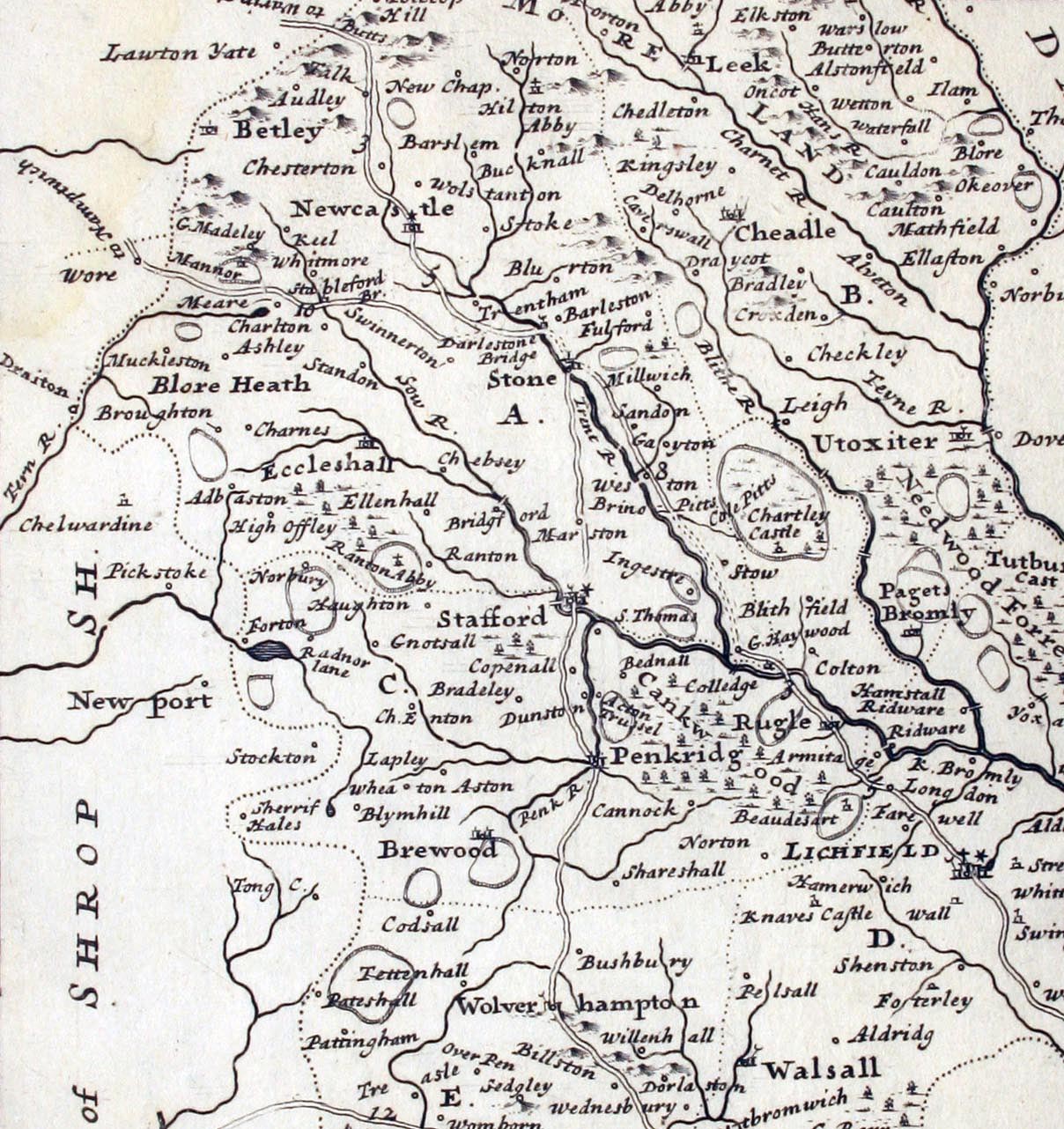